Dr Les baileys passion for prescription orthotics began over 30 years ago, when he developed plantar fasciitis in both feet, causing him immense pain.

He was a Thai boxer back then, and ran many miles a week, which transpired, was not the “cause” but the factor that exposed the condition (After all, not all runners get this condition). Then began the usual treatments that are doled out. He tried ultrasound, and finally cortisone injections into the foot, but to no long lasting impact.

He was at an osteopathic event, and by sheer luck, ran into Peter Bell, who ran an orthotics laboratory in Northampton.
Peter took measurements for orthotics, the plantar fasciitis was cleared. However, something else happened which surprised Les. He used to have to have his sacroiliac (lower back) treated once a week by his colleague, which got painful standing treating patients all week.

The sacroiliac pain ceased completely, and he has never had the back treated again in over 30 years!
Furthermore, the knee pain and shin splints he had through running, disappeared. He was at a loss as to why this was not taught in colleges of Osteopathy, chiropractic, or physiotherapy, and still is not. His outlook is that one can not possibly properly treat lower back, knees, legs or feet without considering foot function.
He contacted Peter Bell, and Peter agreed to teach Les the rudiments of prescribing orthotics, and Dr Les Bailey went on to get his biomechanics qualifications and successfully completed his PhD (Doctorate) in the field.

He has run the orthotics side of  clinics all over the UK and Ireland, treating many thousands of “hopeless” cases.
His work has featured in the national press, beginning with a full page article in the daily mirror in 2002, appeared on TV, and many magazines.

In 2005 he wrote a book called “the layman’s guide to foot and heel pain”, which by it’s 3rd edition, sold over 35,000 copies. The book is currently awaiting its 4th edition, so is out of print, but copies appear on eBay and amazon frequently.

You can see hundreds of testimonials to his work with orthotics, including celebrities such as jimmy white and Lesley pearse, (Jimmy was quoted as saying Dr Les Bailey saved his career!) by going to the testimonials page and the links page.

Should you wish to discuss your issues to ascertain whether orthotics May be an answer, please contact Dr Les Bailey personally (see contact page). 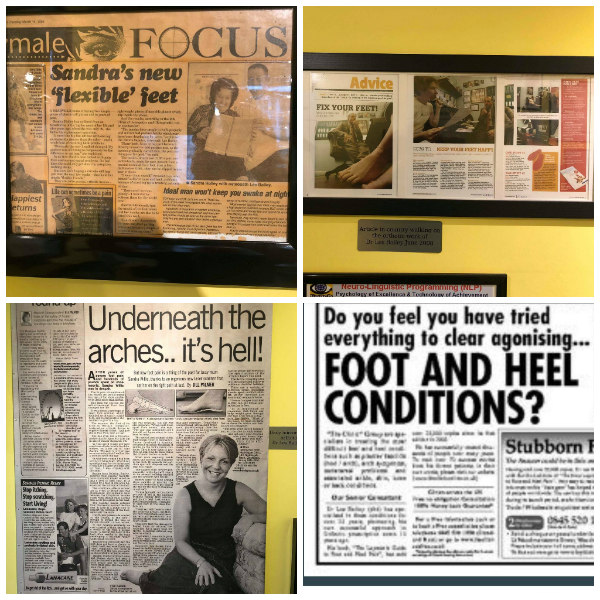